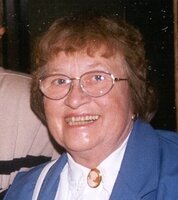 Winifred K. Guthrie, 96, of Fairfax, VA, passed away peacefully on Friday, May 27, 2022, at her son’s home in Woodbridge, VA. The daughter of the late Harvey and Mary Wolfe Knox, she was born December 7, 1925, in Gibbon Glade, PA. Winifred graduated from Uniontown High School in 1943 and received a Bachelor’s degree in Business from Elizabethtown College in 1949. She married Clarence Guthrie on September 11, 1949. Soon thereafter, they moved to Fairfax, VA, where they resided for the rest of their lives. Winnie was a homemaker who enjoyed family trips, bowling, candle making, cake decorating, and researching genealogy. She was a long-time member of the Daughters of the American Revolution. Winnie is survived by a daughter, Wendy Jefferies, and her husband, Richard, of Stallings, NC; two sons: Clair Guthrie and his wife, Brenda, of Woodbridge, VA. and Alvin Guthrie of Bruceton Mills, WV; seven grandchildren: Tim Jefferies and his wife, Becky, Mandie Kight and her husband, Brent, Kyle Guthrie, Tyler Guthrie, Bryanna Guthrie, Colton Guthrie, and Aidan Guthrie; and four great grandchildren, Charlotte and Robbie Jefferies and Emersyn and Beckett Kight. In addition to her parents, she was preceded in death by her husband, Clarence E. Guthrie, February 22, 2011; a daughter in-law, Aimee Guthrie; and a grandson, Clair Guthrie, Jr. Family and friends may call at the Carl R. Spear Funeral Home in Brandonville-Bruceton Mills, WV, on Tuesday, May 31, 2022, from 6-8 p.m. and on Wednesday, June 1, from 10 a.m. until the 11 a.m. service in the funeral home, with Pastor Michael Guthrie officiating. Burial will follow at the Shady Grove Cemetery in Bruceton Mills, WV. Condolences may be sent to the family at www.spearfuneralhome.net.