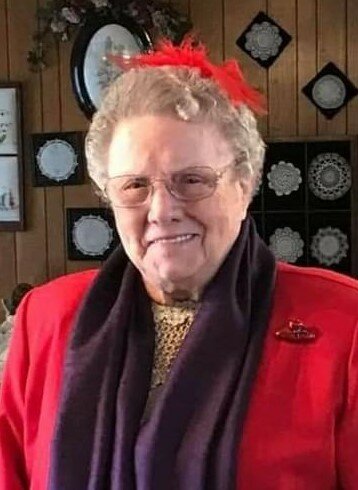 Please share a memory of Wilma to include in a keepsake book for family and friends.
View Tribute Book
Wilma Belle Nieman, 89, of Bruceton Mills Community, entered the Gates of Heaven on Friday, August 20, 2021, with family by her side. The daughter of the late Noble and Pearl Spiker Galloway, she was born in Kingwood, WV, on March 17, 1932. A 1950 of Bruceton High School, Wilma faithfully attended 71 years of class reunions and was an active member of the Bruceton High Alumni. She was a member of the Bruceton TOPS Group, Bruceton Mills Historical Society, Friendship Club, Red Hats, North Preston Senior Center, and Bruceton United Methodist Church. A leader of the Homemaker’s Club, she was also President of the United Methodist Women’s Group, President of the PTA, and Chairman of the Farmers’ Home Advocate Committee. She was a volunteer at the Local Food Pantry and had donated 70 homemade quilts to families in need. Wilma was honored as the Good Neighbor for the Good Neighbors’ Day Celebration in the late 1990’s. Wilma was a woman of many talents. She owned her own ceramic shop, was a leather maker, and made hand painted cards. She also owned her own long arm quilting machine and was known for her famous quilting. The wife for 64 years of the late Ramond Curtis Nieman, they operated Raymond’s family dairy farm and raised five children. She was a baker, homemaker, and was a devoted caretaker for her family and many others during her life. She was a friend to all and never met a stranger. Wilma is survived by five children of Bruceton Mills: Ramond “Skip” (Connie) Nieman, Rodney (Mary) Nieman, Theresa Nieman Fike (the late Chester Fike) and companion, Allen Conner, Richard Nieman (Anita Clark) and Roger Nieman. She is also survived by 11 grandchildren: Robbie, Casey, Susan, Tony, Amy, Buffie, Brandy, Renee, Rusty, Ronnie, and Reggie; 23 great grandchildren, Danielle, Randy, Wade, Collin, Abby, Michael, Hannah, Evan, Grant, Mason, Tyler, Whitney, Madison, Dylan, Destinee, Jeremiah, Raymond, Andrea, Micah, Ryan, Raegan, Owen, and Wyatt; and 10 great-great grandchildren: Delaney, Branch, Landen, Tucker, Weston, Raylee, Harper, Branson, Nash, and Caden. Surviving her also are 5 siblings: Darwin Galloway, Rex Galloway (Peggy), Kermit Galloway (Hazel), Phillis Garlow and Twyla Metheny (Bub). She was preceded in death by a granddaughter, Stephanie Fike; great grandson, Buster Nieman; 4 brothers: Delbert, Lee, Larry, and Keith Galloway; and one sister, Mary Elaine Galloway. Family and friends may call at the Carl R. Spear Funeral Home in Brandonville- Bruceton Mills, Sunday, from 2-4 and 6-8pm, and Monday, August 23, 2021, from 10:00 a.m. until the 11:00 am service in the funeral home, with Pastors Steve Wotring and Tim Wotring officiating. Burial will follow in the Bruceton Cemetery, Bruceton Mills, WV. Wilma was a breast cancer survivor of 20+ years and was an inspiration to many people. The family express gratitude to the care given her by Hospice. In lieu of flowers, the family requests donations be made to the Mary Babb Randolph Cancer Center or Amedisys Hospice. Condolences: www.spearfuneralhome.net
To plant a beautiful memorial tree in memory of Wilma Nieman, please visit our Tree Store

Look inside to read what others have shared
Family and friends are coming together online to create a special keepsake. Every memory left on the online obituary will be automatically included in this book.
View Tribute Book
Services for Wilma Nieman
There are no events scheduled. You can still show your support by planting a tree in memory of Wilma Nieman.
Plant a tree in memory of Wilma