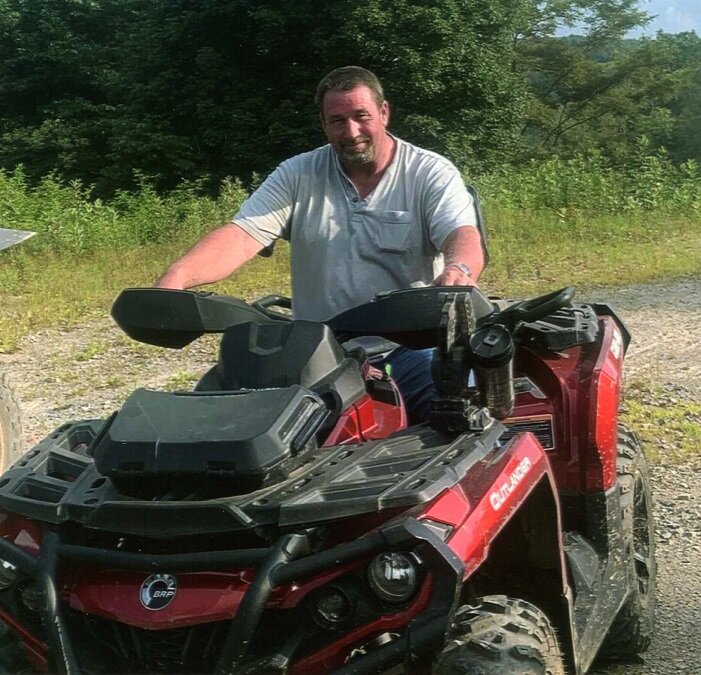 Please share a memory of Sheldon to include in a keepsake book for family and friends.
View Tribute Book
Sheldon Richard Savage, 48, of Bruceton Mills, WV, died Sunday, October 17, 2021, at home. The son of Mary Lou Nicholson Savage and the late Sheldon Ray Savage, he was born on April 11, 1973, in Morgantown, WV. Sheldon was known for his extreme physical strength. He could lift an entire refrigerator by himself but was known as a gentle giant. With a cigarette in one hand and a coffee in the other, he could back a trailer into any spot. He discovered a love for woodworking and had an eye for detail and constantly strived to make surfaces smoother. He built dressers, framed his wife’s diamond art paintings, and perfected cornhole boards. Sheldon loved his John Deere tractors would often try to convert others by asking them to take his tractor for a spin. If he ever tilled a garden or helped someone with landscaping, he had the patience to turn the toughest soil into sand and the steepest grade into a rolling hill. Sheldon obtained his CDL’s just after graduating from high school and drove a truck for Larry Wagner and Ames. He was a union laborer for a short time at Donegal Construction, where he quickly schooled his mentors and was promoted to operator. He spent the last 16 years as a heavy equipment operator with IUOE Local 66 in Pittsburgh. On most weekends, he could be found on his 4-wheeler, under the awning of his Big Horn camper, or in his wood shop. However, his greatest contribution to this world was his two sons, Curtis and Aaron. In addition to his mother, Mary Lou, of Bruceton Mills, Sheldon is survived by his wife of 20 years, Colleen; two sons, Curtis and Aaron; his sister and her husband, Kimberly and Justin Burnworth, of Bruceton Mills; his sisters-in-law and their husbands: Janie and Donnie Franks, of Smithfield, PA, and Jamie and Richard Neal, of Weston, WV; his brother-in-law and his wife, Robby and Dani Marshall, of Bruceton Mills; his many nieces and nephews: Eddie Ray, Erika, Amanda, McKenna, Sydney, Luckas, David, Tanner, Jimma, Brantley, and Briar; and his wife’s parents, Jim and Nancy Marshall. In addition to his father, he was preceded in death by his grandparents, Curtis and Martha Nicholson, and his wife’s grandparents, Audrey Boyd and Junior Marshall. Due to the increased prevalence of the COVID virus, a public funeral and burial will be held at the Nicholson Heavenly Family Cemetery in Bruceton Mills, Thursday, October 21, 2021, from 3:00 until the 4:00 p.m. service, with Pastor Mark Seese officiating. Those in attendance are requested to wear masks and practice social distancing. The Carl R. Spear Funeral Home of Brandonville-Bruceton Mills, WV, is in charge of funeral arrangements for the family. Condolences: spearfuneralhome.net
To plant a beautiful memorial tree in memory of Sheldon Savage, please visit our Tree Store

Look inside to read what others have shared
Family and friends are coming together online to create a special keepsake. Every memory left on the online obituary will be automatically included in this book.
View Tribute Book
Services for Sheldon Savage
There are no events scheduled. You can still show your support by planting a tree in memory of Sheldon Savage.
Plant a tree in memory of Sheldon